All articles tagged with "Smother"

Mistress Ava Black and her female colleague knew that this male colleague was gullible so they took advantage of him. They had a bet with him knowing they would win. He lost and they trampled him as punishment. He had to endure smelling and licking their pussies and their asses. He nearly choked but he consoled himself with the fact that he had smelled and touched the pussies of his colleagues.

Mistress BlackDiamoond was not happy with her employee's performance. She wanted something done urgently so she punished the slave. She went to his office and she sat on his face without warning. She removed her dress and she made him lick and smell her ass. She choked him to show her she was serious. He had never been that scared and he begged for mercy and promised to improve his performance.

Mistress BlackDiamoond and her facesitting fetish

Mistress BlackDiamoond felt like humiliating her slave even though he had done nothing wrong. She convinced herself that it was why she had him in the first place so she went to his room and she made him lie on the bed and she facesat on him. She farted on his face and told him to enjoy it. She also wiggled her butt on his face to make him feel some pain.

Madame Marissa is a strict disciplinarian and does not like it when slaves misbehave. She has to nip it in the bud in the event of something like that. When she noticed that her slave was developing signs of laziness, she used her jeans to crush his face as she wiggled her ass on it and forced him to smell her ass as she facesat on him. It taught him a lesson and he changed.

Goddess Amirha does not like a boring sex life and when she realized that they were getting a bit comfortable and their sex life was beginning to get boring, she decided to resuscitate it. She got on top of her boyfriend without warning and she facesat on him and roughed him up. He was surprised at first but it turned him on as she took charge of everything and it turned her on to be in charge. 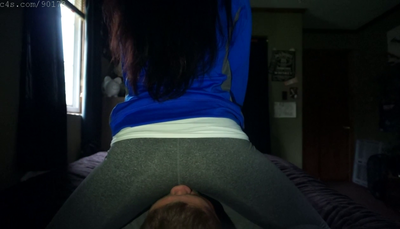 Lesbian mistress have fun with each other

Mistress Tassia and her lesbian lover mistress Candy like to try different things. Today they were trying facesitting fetish and no one wanted to let the other start. So they had a bet and mistress Candy won it. She began by whipping her lover and using her jeans to facesit on her. They love rough sex and that is why they resorted to facesitting as well as light whipping as they had fun.

These lesbians are kinky and love to have all kinds of fun. They do not like to have ordinary kind of fun because they are naughty mistresses. Ordinary things do not please them. Today one of them tied the other and she masturbated by rubbing her pussy as her lover watched hungrily. Then she facesat on her tied lover and rubbed her pussy and clit against his face as she struggled to break free. Then she switched to 69.

Mistress Laura entertains herself on her slave

Miss Laura wanted to watch a movie online but she realized there was no internet. Her slave had forgotten to pay for it and she was pissed at his forgetfulness. She forced him to endure her facesitting and made him lick her ass and also smell her feet. She made a decision to humiliate him as part of her entertainment now that there was nothing else she could entertain herself with.